Last week, the Ottawa Independent Writers invited me to give another workshop on social media for writers, after a very fun one in January 2013. Always a great group, I was thrilled to be invited again.
For anyone interested, here's the presentation. We focused a lot on online strategies, action plans and actual platforms. Even without my charming exemples of embarassment, it might prove useful.

I also promised I'd post some basic information on how to create an account. To encourage basic social media use, I invite folk to go to YouTube and search for "How to Create a Facebook/Twitter/etc. Account." The link brings you to the Facebook basics. It's a good start.

On the topic of social media, I'm also a guest speaker at a conference on Wednesday on that very topic, except super more academic.  I've woven stories with practices in my part, and hope you'll drop by to hear it! Check out the info here: 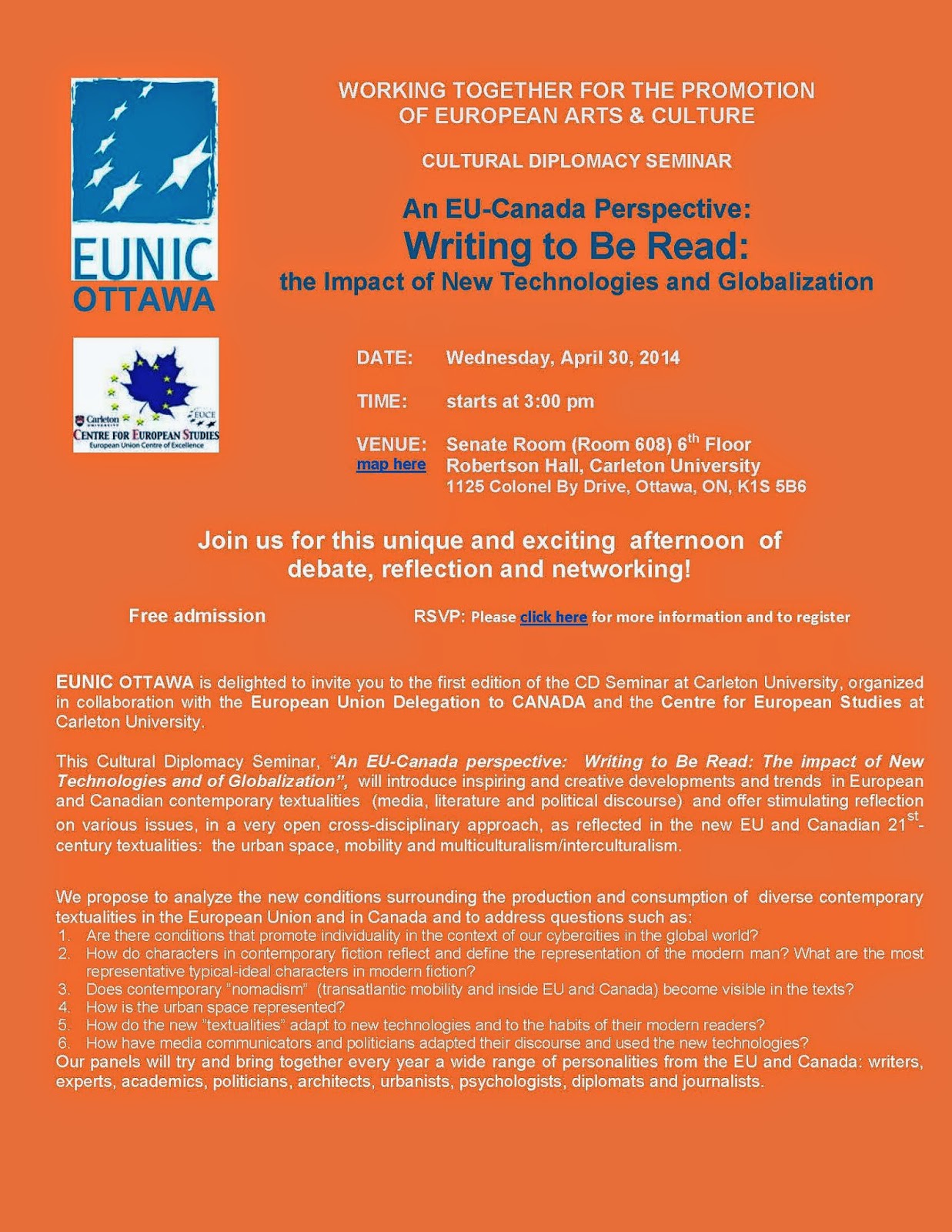 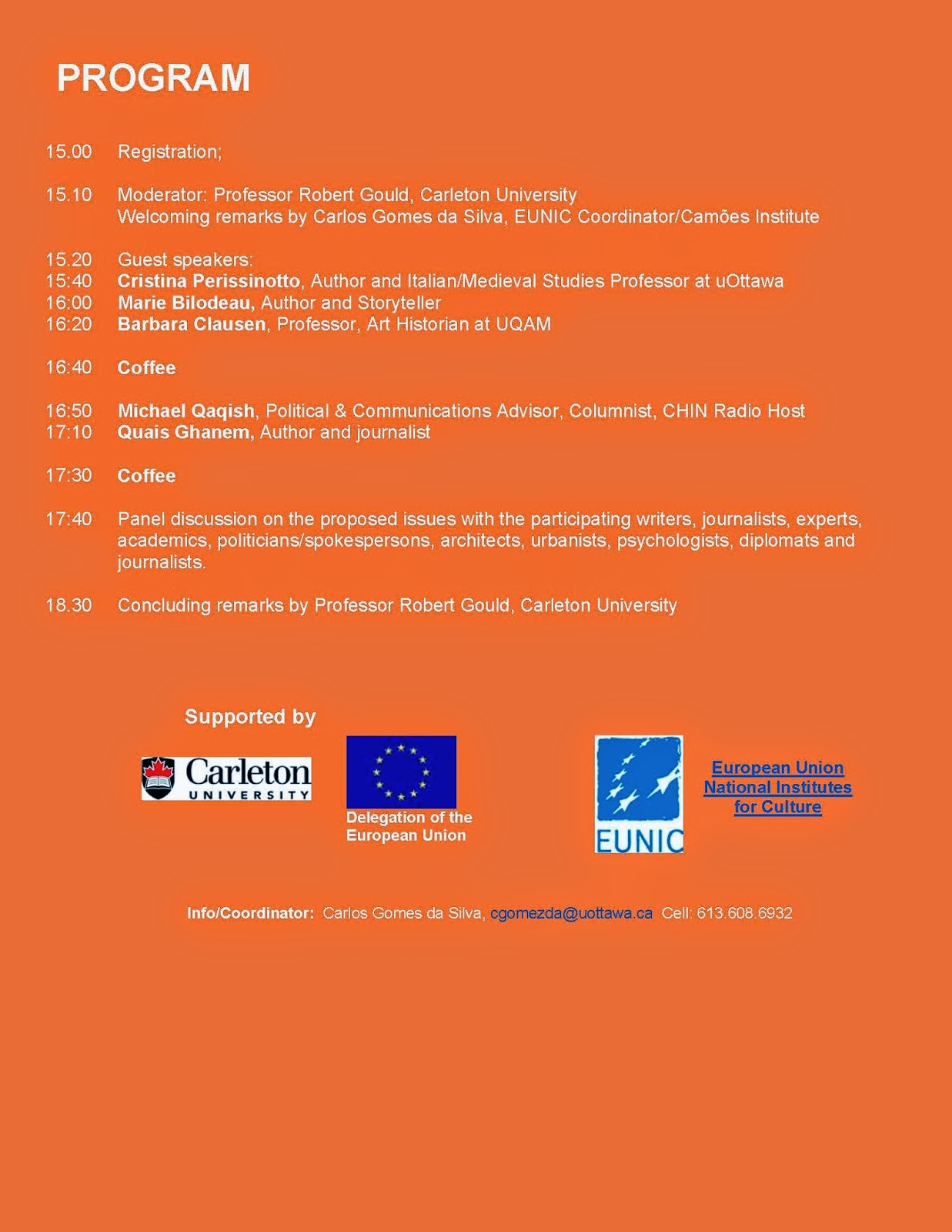 Posted by Marie Bilodeau at 06:30 No comments:

Ad Astra - How I Love Thee

This weekend was a romp in Toronto.  We left Ottawa at noon with a car full of Ottawa writers. (Several such cars leaving from Ottawa around the same time. I truly regret not suggesting a caravan. Because caravans are cool.)  My car was also full of party supplies for the CAN-CON party, but we managed to tuck everything in okay.

I had a panel at 8 and another at 9. Based on these two panels, I've decided that I love Friday night panels. Everyone is still so awake and I get to be a pest and people think it's funny.  My first panel was the Myth-Information in Modern Fantasy.  I knew all of my co-panelists and knew they were all awesome and interesting people (Chadwick Ginther, Jen Frankel, Stephen B. Pearl, Katrina Guy).  We started off by dancing around myths, legends and fairy tales that were interesting, but I really wanted to push the discussion further. Were fantasy writers limiting themselves by following mythic structures?  Were archetypes passé? Did science-fiction have the "cutting-edge" reputation because it didn't generally conform to a pre-existing structure?  And so on, so forth.  So I kept asking if I could ask questions, because I wanted to hear their smart answers.

That was a popular game that I played, apparently, since the audience laughed every time I asked a new question. I am disappointed, however, that I couldn't get a pitchfork mob formed to go against a certain Black Gate blogger for some of his recent posts.  I think he was disappointed, too, but oh well.  Maybe next year.

The second panel was all about having a day job and writing. Again, wonderful panelists (Ada Hoffman, Joel Sutherland, Karen Danylak). This panel reinforced my belief that authors need to chat about writer burnout. More on that later.

Saturday was as much fun as Sunday. I killed myself laughing on several occasions, especially at the book signing while discussing zombie turtles with Linda Poitevin and James Alan Gardner. But, come on - zombie turtles.  There is nothing not awesome about that.  My reading with Matt Moore was a lot of fun and quite full (thanks to everyone who came out!), and Matt read one of my favourite stories of all time, Touch the Sky, They Say. Find it, read it. It's beautiful.

The CAN-CON Sweets and Caffeine Party was great, and thanks to Robin Riopelle for saving me by bringing in cupcakes after I'd realized I hadn't made cupcakes despite cheerfully exclaiming about them on Facebook. My party co-organizers also picked some up, so we were rocking. Party organizing is all about surrounding people who can cover your cupcake faux-pas. The chocolate fountain was a hit, especially once maintenance came over with pliers to turn the broken nob.  I hope we enticed many people to come out for CAN-CON (Ottawa, October 3-5). It's a fun and smart con, and we need even more smart and fun people. Which there were lots of at the party!

I had so many great conversations that I can't capture everything right now, especially as I'm still lagged over by Gravol.  That was how my con unfortunately ended - waking up at 1 on Sunday morning with the awkward thought "am I dreaming I'm nauseated, or am I actually nauseated?"  Well, turned out it was food poisoning, so I had to cancel everything that morning and try to get better enough to sit in a car for five hours on the way home.  Thanks to my roommates, Mary Pletsch, Nicole Lavigne and Sarah Parkinson for mothering me and taking over my Sunday morning life. Much appreciated! (I think it was a hot dog that did me in. Damn hot dogs!  Damn yummy hot dogs...)  At one point, I ran to the bathroom quickly, in the dark, not realizing that one of my roommates had closed the door over after using it last. I threw that door open with my forehead. Shocking and funny all at once.  But no goose egg, so that's good!

Ad Astra was a hit again this year, and I can't wait until next year! Thanks to the organizers for another great con!
Posted by Marie Bilodeau at 07:10 No comments:

Blog Hop Thing In Which I Cannot Follow the Rules

The wonderful Eileen Bell invited me to do a blog hop thing. I thought hopping kinda sounded like twirling, which I reallllly like to do, so I hopped right on! (Ha!)  She sent me rules and stuff, but those sounded kind of boring, so I'm only following the inviting three other authors for next week.

I'M BREAKING ALL THE RULES BWA HA HA HA HA!  Which is why I'll never be invited to twirl again. Sigh.

So, first I answer questions. These are them and I interpret them however I desire.  MY BLOG MY RULES!

QUESTION 1: What am I working on right now?
I'm thinking about cupcakes!  Because we're having a party this weekend and we announced it as a Cupcakes and Sweets Party and it's NOT because THERE ARE NO CUPCAKES!  But I'm not working on them, so I guess that doesn't count for anything.  And I think this is supposed to be about writing.

... It's not a good haiku, but it celebrates the imminent spring.  I feel that works.

QUESTION 2: How does my work differ from others of its genre?
I blow lots of stuff up and kill people.  What makes me stand out is that, UNLIKE THE REST OF YOU HEARTLESS SF/F WRITERS, I sometimes have a conscience. See?

QUESTION 3: Why do I write what I do?
I think I'm funny, even when I'm super dark.

QUESTION 4: How does my writing process work?
I sit down and write. I drink lots of caffeine. Sometimes, I don't sleep for a couple of days. And I hang out at convents.  But mostly, it's the writing part that matters. Usually that does the trick.

I've invited three members of my writing group, the East Block Irregulars, to join this twirling thing with me, BECAUSE THEY ARE THE BEST AND YOU MUST READ ALL THAT THEY WRITE!

I kinda forgot to ask for their bios, so I made them up instead.  But I totally checked their weblinks, so that's good.

Hayden Trenholm
The background shadows in every shot (every. single. shot) of politicians on the Hill contain Hayden. You can't see him clearly at first, but keep on gazing, and don't blink even as the tears stream from your eyes. You'll eventually see him. First in those shadows, and then everywhere else. If you read his detective noir novels (the Steele Chronicles) or read his latest anthology (Strange Bedfellows), you'll suddenly understand why he's in those shadows. He recently extended his conquests through Bundoran Press, which he *says* he acquired through proper channels. Check out his website and actual bio at http://www.haydentrenholm.com/.

Matt Moore
Matt was the only baby in the world, of any age or time, to be born on the day of his birth.  Some say it's given him special insight into the human psyche; others say it's driven a wedge in his sanity. If you read any of his works, don't string every second word of each sentence together.  IT IS AN EVIL SPELL.  If you see him host the Ottawa ChiSeries, make sure to say "AMEN" every time he lifts his hands, or YOU WILL BE STRUCK DOWN.  Check him out at http://mattmoorewrites.com/.

Geoff Gander
Geoff didn't exist until a year and a half ago, when an Elder God accidentally summoned him from the darkest depths. Each strand of his curly hair crackles with unspent magic, which makes conversing with him difficult. To make up for this unfortunate condition, he's learned to sing every piece of dialogue, which is particularly welcomed at his D&D games. Check out his hair at http://geoffgander.wordpress.com/.
Posted by Marie Bilodeau at 07:23 No comments:

This weekend, I'll be at Ad Astra! Always a super fun con, we're compounding the fun once again by hosting another CAN-CON cupcake/sweet/caffeine party. Woo!

Myth-Information in Modern Fantasy
8 pm, Markham A
How do authors incorporate traditional lore and myths into their modern-day fantasy settings? Is it possible to make a witch burning pertinent in the twenty-first century? Discuss these, and other inflammatory questions, in this panel.
Chadwick Ginther, Jen Frankel, Marie Bilodeau, Stephen B. Pearl, Katrina Guy

Writing When You Have a Day Job
9 pm, Markham A
Forget work-life balance. In a world where work hours are getting longer and many of us are constantly connected to work, how do you balance the demands of two jobs - the one you love and the one that pays the rent? Can you reasonably succeed at both? Come hear our panelists discuss the challenges of trying to write while holding down a day job and learn their tips on how to make it work.
Ada Hoffman, Joel Sutherland, Karen Danylak, Marie Bilodeau

Reading
1 pm, Oakridges
I'll read from Destiny's War, and possibly The Kevlar Canoe again. For I love it so. Or maybe from a work in progress!  Who knows...

Author Signings
2-4 pm, Richmond A
This is where I sit and look pretty until someone brings a book to sign to comes to chat. It's all good.

CAN-CON Cupcake and Sweets Party
6-8 pm, Suite 1086
This will be oodles of fun.  I hope you come and consider coming to CAN-CON in October!  Jo Walton is the guest of honour this year.  She's awesome. If that doesn't lure you out, then this will: Paper Airplane Competition.  That's right.  You heard me.  ... so, we'll see you there, then!

The rest of the time, I'll be sitting at tables (both the Dragon Moon and the Bundoran tables), I'll be going to see some of my friends readings, and I'll be hanging out chatting. Can't wait to see you!
Posted by Marie Bilodeau at 08:00 No comments: