Following my blarghing about female authors hiding their gender in pseudonyms, I wanted to get some different thoughts on the whole thing. I invited Sheena McNeil, Editrix-in-Chief of Sequential Tart, avid reader, burgeoning fiction author and just all around awesome individual, to share her thoughts on the matter. Thanks for sharing, Sheena!

I love reading stories that touch on that theme. There's usually magic and / or magical beings involved (dragons, demons, sorcerers, etc.), and knowing someone or something's true name allows one power over them / it. In this case, names are personal, not just because they belong to the character, but because it allows a deeper level of interaction with that character -- and usually not in a good way. True names were kept secret because the use of it could allow control over the named. Sometimes, true names can be shared with someone (usually one person -- a soul mate) and shows the ultimate trust. Doctor Who keeps teasing us with this (and I hope they continue to, because the mystery adds to the character). Parents know how to use the power of a name (or at least they did when I was growing up); if they used your full name (including the middle name), you were in trouble and / or need to do or stop doing something immediately. Using your full name means they're serious, and attempting to avoid whatever it is will lead to unpleasant consequences. It was a way to rein you in.

Sometimes noms de plume are used to keep one's true identity secret. As an example, some voice actors used to be credited with a made-up name because voice acting, while a paying gig, was not considered "real acting" and might affect their chances of getting a "real" acting job. Of course, now it has swung the other way, and leading voice actors are having trouble competing with Hollywood giants crossing into voice acting, where their name alone can sell a movie. This secret identity reasoning seems to becoming less and less needed in today's society, regardless of media, and it doesn't make much sense for authors trying to market the book themselves (including in person, at cons, etc.).

I, personally, don't look at authors' names on the cover, unless I enjoy the book and need to find more of their work. I'm also spoiled in that I read a lot of Japanese manga, which, at least on the surface, doesn't seem to have the same problem with pitching or selling works based on the gender of the creator or the assumed gender of their name. Though there may be some issue when you get into specific genres, there are still a fair amount of female creators making shonen (for boys) manga, like Rumiko Takahashi (Ranma ½, Inu-Yasha) and Katsura Hoshino (D. Gray-Man), and pseudonym's are not used just to fit into a genre, like Kyousuke Motomi , the male identity (she even draws herself as a man) for the female manga-ka of Dengeki Daisy (a shojo, for girls, manga). So, my library is full of female authors ... it's just that most of them are for manga rather than novels. However, I've been reading more female authors (with female names on the covers) over the past few years, partially due to a search for leading female characters (which is a related, but separate topic for another day) and letting friends (and book swap partners) select books for me based on that one criteria.

Female authors using male pseudonyms is something I've been aware of for a long time (at least since I was a teenager, if not before), but back then I didn't think too much of it. Given their time period, there was an understandable logic for the Brönte sisters to use male pseudonyms. However, the persistence of that "logic" into the modern day is sad / infuriating / frustrating (take your pick; there are many more words I could use). It seems to be the same logic used by companies to exclude female characters (Gamora, Black Widow, Honey Lemon, etc.) from merchandise, including gender-neutral merchandise like fabric in a fabric store -- the logic that boys think girls are yucky and that that mindset is normal and acceptable. The fact that it was a woman spreading this logic -- or more on topic, that women agents will favor submissions by men's names over women's (see the recent Jezebel article) -- has to do with this "logic" being pervasive through our culture. One recent example is a small study showing the difference between how men and women are evaluated (and the wording used in those evaluations) in job performance reviews (from both male and female managers). This patriarchal mindset is so pervasive that pointing to female agents not responding to female submissions while responding to male ones as being a reason that the bias isn't based on the author's name, is circular logic.

We are still in a society where the default is male, and bows / hearts / makeup / heels  / the color pink must be added (visually) or Ms. / -woman / -girl (verbally) to indicate female (think Pac-Man / Ms. Pac-Man, and you can watch Feminist Frequency's video on "Ms. Male Character" in video games here). The word "default" is key here. If the default is male, putting something feminine on the book (like a female author's name) automatically alerts people that it is not-default, and, in the case of an agent or publishing house, that means a potential risk. It's not just books, either (see this video on market segregation, which also discusses that "it's much easier to get women to buy men's stuff than it is to get men to buy women's stuff"). In fact, it's not enough to just fight the system by using your female name or female pseudonym on the cover (and supporting those authors); the only way to truly break the circular logic is to change our mindsets and be proactive in changing or not having a default. 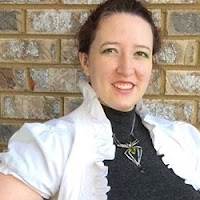 Sheena is the Editrix-in-Chief and the Reviews Editrix of Sequential Tart. For over fifteen years she has been heavily involved in conducting interviews and writing articles on and reviews of comics, manga, and more. Sheena is also a pioneer in the world of modding or customizing My Little Ponies with almost two decades of experience, and she has given multiple talks on this topic over the years. Her main job is running a traditional martial arts school with her husband, where she is the lead instructor in Satori-Ryu Iaido and Shindo Muso Ryu Jodo.
Posted by Marie Bilodeau at 15:14