Of Packing and Parting

I’m moving tomorrow. My roomy Ri (who is more like a sister), our kitties Merlo, Bart, Buster-Bear and Cosmo-Kitty, her Beta fish Spike, Utnu and I are all upgrading to a really nice three bedroom townhouse, so we all have more room to run around in and hide form each other. Very important.

I’ve been living in apartment 413 for a month shy of 8 years now, and the apartment has been in ‘my family’ for almost ten years. My brother and mother first moved in there (with Bart), and then my brother moved out. I then moved in there with one of my best friends, Ren.

We hunted for our first ‘real’ jobs together, we began our careers, we laughed a lot with my increasingly deaf mother, and we all frowned at the latest Star Trek movie (Worf would so not say that!). We discovered Digimon, Pokémon, Poufy-haired boy and generally had a good time. And then Ren moved out (to an apartment downstairs), and then mom moved out (to an apartment across the street), and I was living all alone for the first time in my life. Well, as alone as you can be with two tabby boys. 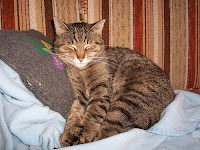 And then it got a bit lonely. Yes, even with two tabby boys. (The gray one's Bart, technically my brother's tabby. He's psychotic and dislikes change. The move should be fun!)

So when my not-yet-dating-my-brother best friend who had been studying in Buffalo, Wessy, was returning to town and needed somewhere to be, I suggested she move in with me instead of her parents (let’s face it – I’m more fun). We threw a terribly westernized Mexican Fiesta as a housewarming party, and we decided it would be fun to put a hook in the middle of our living room ceiling for a piñata. We stuffed the piñata full of stuff (more confetti!!) – so much so that when my brother finally killed the Godzilla look-alike, nothing fell out – we had to pull it out.

And then we killed ourselves laughing a few days afterwards when, having finally finished picking up the last of the confetti (and sweating profusely), I turned on the air conditioning unit, and out came flying a bunch of confetti. Ah, the good times.

Then the squirrels invaded, looking at us with their beady little eyes through the chewed-up drywall on the big room in the back. We sealed it after many months of squirrel hunting (it went very wrong), and my tabbies got their first rabies shots. We had a nice fresh patch of gray drywall hiding their hole. Very fashionable.

My brother proposed to Wessy by some beautiful waterfalls, and a short time after she left to begin her life with him.

And it was me and the tabby boys again for just over a year. (The orange one is Merle - he's never ever moved in his whole entire eight years of life, knows only 413, and has never encountered stairs. This should be fun!)

Then a year ago, Ri, another one of my best friends (we’re five best friends, in the same little team), was running into dire financial straits (end of PhD = no money), and I invited her to come in my three bedroom apartment (she lived in the building near mine. We migrate towards each other that way.)

So she came, and we had loads of fun, even though our kitties do tend to squabble. The roof leaked for a very long time and Lake Bilodeau almost took out Ri’s comic books, but we prevailed. We played lots of snowboarding on my Playstation 2, we duked it out over Trivial Pursuit, and we analyzed many crime shows together (well, she did. I mostly analyzed who was who: “Are you sure he didn’t do it?” “No Marie. He’s the detective. He’s been the detective this entire season, and the last season too. You watched them all. All of them.” “Oh ya!” and promptly falling asleep on the couch.)

And then it was time to go. Ren had moved across the river, so had Wessy and my brother. The apartment was fairly ruined by its leaky roof, and it was getting a bit small for all of us. Besides, when they repaired the ceiling (and made a mess of the apartment), they removed the piñata hook. It just wasn’t the same afterwards.

And tomorrow I leave good old 413. I’m looking forward to the new adventure, though I’m sad I won’t be living right in front of my mom’s (no one cooks like her!) Still, I’m sure we’ll have lots of fun, and I’ll have a writing space again, which is wicked cool!

But still, when I walk around the packed apartment, I can’t help but remember all the good and the sad times, all the hopes, the dreams and aspirations that took shape there, either alone or with someone else. The victories that made me shout in success, the novel scenes that made me cry into the night, the candles flickering against the dark red walls as soft music played in the background and the world slept outside.

And the rooms I cried in every time someone else left, alone in its empty echoes, before I filled it again. And I’m certain that tomorrow I will probably shed a tear or two for the now crappy apartment I had learned to love and call home.

… Although, I never did paint over that gray squirrel hole.