THIS BLOG IS NO LONGER ACTIVE

I *loved* blogger and all that it's done to help grow my career since 2007. But, with too many books and not enough pages, I moved over to www.mariebilodeau.com, with a brand new site. Come join the continuing insanity there!

This place will remain as an inactive archive. Enjoy!
Posted by Marie Bilodeau at 15:12 No comments:

A Dash of Axe and Death for Your Valentine's Day!

Gluck is coming to romance you this WITH DEATH AND MAYHEM this Valentine's Day!

Launching on the new Radish app, which is *also* launching that day (I'm a launch author! Yay!), this serialized story is fun, mayhem, magic and battle in a post-war landscape.

In other words:  you won't want to miss this!

I'll be sending a special promotional offer on Valentine's Day to my eNewsletter subscribers, so make sure to sign up if you aren't already on the list!  Freebies for some!  Giant double-edged axes for others!  (Some fees, waivers and jail time may apply.)

Posted by Marie Bilodeau at 09:26 No comments:

Announcing the Return of Gluck!

Back in 2011, I sold a short story to Ed Greenwood and Gabrielle Harbowy for their When the Hero Comes Home anthology by Dragon Moon Press.  The story was well received, garnering some lovely reviews and even became a finalist in the Aurora Awards (woo!).

Fast forward to 2015, when a new cutting edge publishing company, Radish, approached me (and other cool writers like Linda Poitevin) to provide a story for their app launch in early 2016.  I immediately thought of Gluck the Barbarian and his comrade-in-arms, Alara the elven sorceress.  They still had many adventures to tell as they traveled their post-war land.  It's a serialized sword and sorcery story for a serialized platform (I'm on theme!)  I pitched the idea to Radish and they enthusiastically accepted Gluck as part of their launch stories!

How Radish Works
The app is launching for iOS in February of 2016 (Android and web versions to follow later this year). You start reading a story, which will update two chapters a week.  If you want to read the chapters immediately, you throw some coins our way and you get immediate access.  Otherwise, you wait a few weeks and they unlock.  Simple, clean, efficient. I'm curious to see how it'll be received. Apparently apps like these are popular in the eastern world, for manga and fiction creators.


How Gluck Will Work on Radish
I'm building Gluck as a series of adventures. The first is called Exile, and is basically the original short story (in two chapters). The second adventure is In Death's Shadow, and is much longer.  There will be overarching story lines, recurring characters, side quests and all that jazz. I have a plan, and it's a fun one. 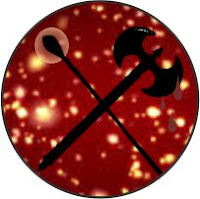 THE LEGEND OF GLUCK

In the wake of Klar the Dark’s defeat and the War of Endings, the people of Arislar must now bury their dead and rebuild. The land has shifted, morphing into something new, with less magic and more monsters. But not all of the dark magic vanished with Klar the Dark’s death, and a new evil seems to stalk the land.

Far from his homeland and the people who exiled him, Gluck the Barbarian travels with his battle companion, Alara the Sorceress. With axe in hand and magic at the ready, they take up the quest for adventure and answers.

Read the Aurora-nominated short story that introduced Gluck to the world, first published in “When the Hero Comes Home,” edited by Gabrielle Harbowy and Ed Greenwood, by Dragon Moon Press.

Gluck and Alara bring news of one of their comrade’s passing to his widow, only to find the small hamlet under the control of a dangerous new order that promises freedom but seems to deliver only death.

Keep an eye out for more news!  Gluck will be swinging his axe again this February. Woo!

Posted by Marie Bilodeau at 11:53 No comments: 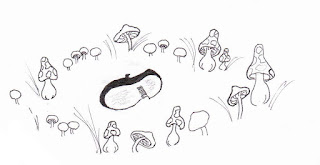 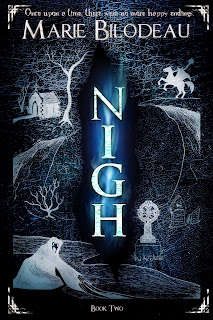 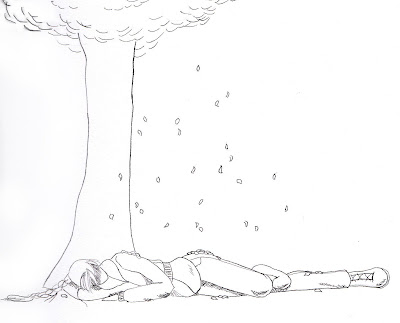 Posted by Marie Bilodeau at 08:10 No comments:

I'm going back to Pinhey's Point on Sunday, from 11-4, to tell scary stories!  Audience appropriate scary stories, so yes, you can bring your little ones!

There will be ghosts, and carnivals, and owls and, um, I haven't figured out my set yet. But it'll be cool!  Storytelling should be every hour, so come on out, enjoy the pumpkin carving and classic Hallowe'en pranks this Sunday, and listen to some stories!

More info here.
Posted by Marie Bilodeau at 09:55 No comments:

WARNING: I SCREAM AT YOU IN THIS POST AND I DO NO APOLOGIZE.

Back by popular demand, the paper airplane contest shall once more wreak havoc upon CAN-CON. I've been asked mutliple questions by citizens: what shall I bring?  Do we need our own band aids?  A change of clothes? To sign a waiver?

Well, here are your answers: BRING ONLY YOURSELVES!

I've also received questions on the rules.  Some of you poor souls didn't make it last year.  So, here are the rules:

That's it.  Bring yourselves only, and be prepared to earn your way to even just folding the paper airplaine.

THIS IS NOT FOR THE WEAK!

It is for the strong.

I've been asked if people, whom I shall now refer to as show-offs, can bring a pre-constructed plane. I've pondered it and decided that I shall graciously accept to allow show-offs to bring pre-made planes within the competition grounds.

BUT YOU MUST EARN YOUR RIGHT TO FLY.

An even harsher skills competitions will be demanded of those who bring a pre-made plane.  If you only bring the supplies and build it on site, I shall be less harsh with my demands.  Slighly.

HOW DO YOU WIN?

I've been asked that, especially considering all of the fine prizes I make available.  Fine, fine prizes.

YOU MUST BE THE BEST!

That's how you win.  And I define best based on my daily whim.

... If this contest doesn't sound like a good time, I don't know what is!

SEE YOU THERE.  8pm. Saturday evening.
Posted by Marie Bilodeau at 21:29 No comments:

Hi! I’m KT Bryski—Canadian fantasy author and podcaster and writing comrade of the ever-lovely and talented Marie Bilodeau. She’s welcomed me to her blog with a few questions. Simple questions, she said. Easy questions. Nothing to worry about. Not at all.

I’m not nervous. Not at all. 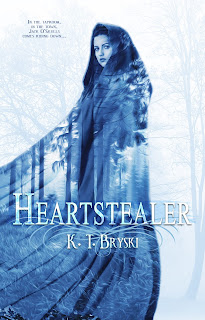 What’s your current project?
That’s…that’s it? Wow, okay. Well, my new novel Heartstealer is a historical dark fantasy. When Sara Wolfe’s husband disappears in a northern backwater village, she doesn’t quite believe the story she’s told. She travels north to find him, quickly becoming embroiled in the village’s old hurts and older magic. The curtain between worlds is thinning, and if Sara doesn’t find her husband soon—well, the ghosts aren’t the only ones stalking the night.

What colour is your novel?
The cover’s mostly blue…

No, what colour does it feel like?
Oh. Deep, deep blues and purples, maybe hints of deep orange. The colour of a late October twilight.

So if you could eat anything in Heartstealer, what would it be?

Read more »
Posted by Marie Bilodeau at 12:01 No comments: