I've mentioned multiple times that Roomy is a My Little Pony collector. I mention more rarely (cause it's more fun to show a bunch of ponies) that I'm a He-Man/She-Ra collector (Masters of the Universe, for those of you in the 80s know).  There are fewer of them, so the ponies win in numbers. They'll always win. But my warriors never rest, and they have a lot of weapons they're itching to use. So many weapons...

When we moved to our new house earlier this year, my figures, which were in my writing room, migrated to the Pony Room, which is now known as the Geek Cave.  Fun, eh?  As per tradition, Roomy started setting up the holiday pony diorama. (Incidentally, that diorama blog post is the most popular I've ever written.  Ever.  The Internet is a weird place, my friends.)


This year, my figures happened to crash the party. Because, well, it's their room, too!

So, the Geek Cave is all lovey-dovey for the moment. For the moment.  But, when you pit so many pink things to conquer, like this:

Again so many well-armed, slightly psychotic warriors, like these:

But not today. Not as the holiday spirit, booze and sugar keep the Geek Cave at peace.

Happy Holidays to all!

Roomy wrote her own take on the Holiday Diorama.  The ponies share a different view. Hu.  Check it out!
Posted by Marie Bilodeau at 08:38 No comments:

What's in a Dedication?

I usually wait until a manuscript is finished completely before I write the dedication. By the time the story is finished and assigned cover art, I usually get a good view of who this book best represents. Destiny's War was no different for me.

I'm lucky to count so many great friends in my life that it's always a bit tough to choose. In Destiny's War, it wasn't clear to me until I saw some inside art developed by Kari-Ann Anderson, the cover artist of the series. 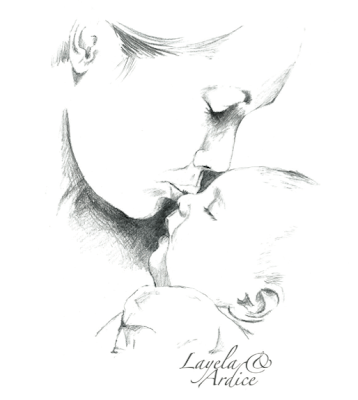 It's beautiful and simple - a tender moment between mother and child.  Truth be told, this could represent so many of my friends. But I had seen one of my friends perform this exact tender gesture with her newborn just a week earlier and, despite all of my shoutings about explosions, in the end, Destiny's War and even Fall is really about the love of a mother for her child.

I have so many good friends and I want to shout about them all the time. They're loyal, kind, hardworking, loving and respectful, and beautiful in every single way I can think of. To me, they're the brightest stars in the firmament of my life, right up there with my family. They ARE my family, and their families are my family, and there are precious few things I wouldn't do for each and everyone of them.  There are five of us all together, and they helped to shape my life into what it now is.

One of my friends, Karen, finished university at the same time as me and we both moved to Ottawa, a new city for both of us. We moved into my mother's tiny three-bedroom appartment and had a blast. We bought a cat together - he was orange and got really fat. We watched Digimon and Pokemon and laughed our heads off at ST: Genesis. We got our first full time jobs, discussed our dreams, shared our frustrations.

In 2001, I made the semi-final cut for a Chicken Soup book (before I discovered my fondness for blowing stuff up).  I ran into her room and woke her up, all excited. She hugged me and congratulated me (and didn't tell me to get the hell out), and I think she fell asleep again as I rambled about my writing dreams.

By end of that year, with her support, I'd written my first novel length story. We decided to package it for Christmas and give it to our friends. She drew beautiful pictures and we stayed up an entire night to get it done, giggling and screwing up so many things. So many.

Her dad owned an inn in Gananoque where she'd bring me for weekends, to write away. I got to sing during supper service. She whispered of her dreams and her hopes.

We went away for road trips together, just us, a tent, her car and a big ol' pile of stuff. One night, camping on a cliff in Cape Breton, a storm struck. The wind terrified me and she desperately tried to sleep on as I vanished under the sleeping bag and tried to hide under her, rambling about the fact that this cliff might have been here for thousands of years, but it was going down tonight (hey, I was sleepy!) The next morning, we laughed about it as we drank warm coffee at dawn and changed into our very damp clothes.

We almost made it to Newfoundland. We will, someday.

With all of my friends, I learned a lot. I learned that friendship is not to be taken for granted. That you have to give and think about what they really need. That you hold your tongue and only whisper encouragements. That you never say "I told you so." That hugs should never be held back. That sometimes, distance is a necessity. That they'll think about these things as much as I will.

With Karen, I went from the whimsical (and psychotic) days of university to tackling this "real world." We learned together about its pitfalls: money, failure, lack of reason and meanness. But we also chose to embrace its wonders: opportunities, hope, laughter and life. And we still learn about it every single day.

So, to you, Karen I dedicate the final volume of the Destiny series. So much of my life would be different without you, my friend. So much of me would be different, the bits that were encouraged to grow and blossom, the parts that keep me going and that I love best of all. Today is your birthday, and I cannot wait to celebrate many more years with you and to see how even more beautiful and amazing you will become, as a friend, a wife, a mother and a kick-ass team member!

Marie
xoxo
Posted by Marie Bilodeau at 07:30 No comments:

Email ThisBlogThis!Share to TwitterShare to FacebookShare to Pinterest
Labels: writing

In June, the Ottawa Storytellers will be hosting The Iliad, produced by 2Women Productions.  We're taking things a bit backward - we did The Odyssey in 2012. But, still, what a journey!

I have to admit that, at some point during the journey of preparing for The Odyssey, I felt I would never undertake something that big again. I've done big shows and cooperative ones - The Kymeras' Bouddica show comes foremost to mind, as well as our recent Evelyn: A Time Travel Love Story. But three or four performers are nothing compared to 18.  Or to twelve hours of telling.

One of the most important steps of preparing for any set is immersing in the story. It's figuring out its quirks and substituting part of our soul with the soul of the story. It's similar to what writers do, except more so, since storytellers have to physically conveny the tale as well as with words.  It's a fabulous but at times draining journey.

Immersing in The Odyssey was tough for me. At heart, it's a story about post-traumatic stress disorder, so it's not an easy topic to tackle. Plus, the language was a barrier.  The epic language isn't the same as the language of the fantastic and I had a steep hill to climb to master that part of the English language. I hadn't struggled with my adopted beloved language in a while, but there I struggled a lot.

We also had to condense the story down so it would work with 18 tellers.  The Odyssey is huge, after all.  We had to cut some stuff, and we had to make sure the same stuff was cut throughout the tale. So it was a lot of work, and with books and cons, it's a lot of work piled on top of a lot of work, all while marching to someone else's drum.

I was excited to tell The Odyssey, but I was also just looking forward to getting it done.

And then the day of the show came and enthusiastic listeners arrived as we were still warming up. And the room darkened and candles danced and we all stood, all 18 tellers, and said (unrehearsed), one after the other, something that the story is...

... one after the other, flowing into one another, a perfect performance that could never be repeated. Not in the same way.

Teller after teller then took the stage, taking up the thread of the story.  I cried when Odysseus finally held his family.  I cheered when he killed the suitors.

And I realized that all of that work had made it all the more real. That, in a very small way like Odysseus' own long journey, the longer and more difficult the ride, the better it was in the end.

Then I knew, without a doubt, that I would do this again and again, for as long as I was asked, because I had learned and overcome so much that to say no would be to cheat myself.

So today, in just a few minutes, we're kicking off The Iliad. We've all read Rieu's translation and we're ready to start the work.  Look out, next seven months.  You're going to be a wild ride!


Posted by Marie Bilodeau at 11:03 No comments:

Destiny's War Available as an ebook!

The final book in the Destiny series, Destiny's War, is now available as an ebook!!  This is a special release from Dragon Moon Press.  The print book will be available in the new year.

The whole series is also now available as an ebook bundle for just 9.99!  That's a steal for three books where multiple worlds get destroyed, lives are changed forever (or snuffed out) and nebulae swallow star systems. (Pretty awesome, I know!)

Several people have asked me (in an appreciative whiny tone) if this would be the final book in the series.  For now, yes.  I'm happy with where the story ends, but I'm not saying I'll never revisit this world. There are still so many stories to tell!

In the meantime, I appreciate signal boosts and of course book purchases and reviews for any of the books in the series.  I'll post links to other bookstores as they come available.  Enjoy the journey! 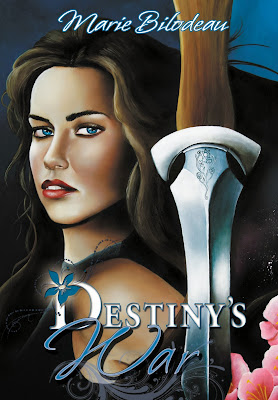 Posted by Marie Bilodeau at 11:33 No comments: