Once Upon a Time, There Were... Endings

The final installment of what Black Gate Magazine called "the first great serialized novel of 2015" is now available! Nigh 5 concludes the story of Alva Viola Taverner, Hector Henry Featherson and everyone else who joined them on their journey of survival through the faerie-apocalypse.If you've been waiting for the series to end before picking it up, now is the time! Book 1 is available as a free ebook at most online retailers, so check it out if you haven't yet.  Thank you for joining me on this journey. Nigh was a labour of love and I'm very happy to share the final part with all of you I'm also a little heartbroken to see it end, as I loved spending time in this horrific yet heartwarming world.Is this the end of Nigh?  I somehow doubt it.  Stay tuned for more updates and, if you enjoyed this journey, please review and recommend the books. I appreciate your support and enthusiasm!  Until next time! 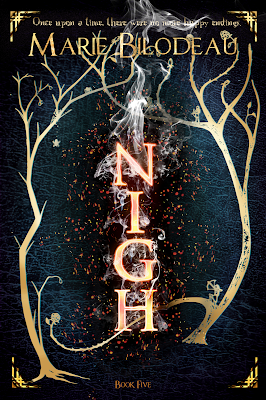 The world didn’t end. It shifted. Adapted. Changed. Everything Alva Viola Taverner has ever understood or known is gone. She’s a mechanic in a world of magic and faeries, where gears long ago turned to rust and dust. Only one thing now matters: surviving long enough to save those she considers her family. But when the world itself is destroyed by the fairy tale, can there be a happily ever after?

When someone awesome like Jay Odjick approaches you to propose a new project, you say yes without even asking for details. Well, I did, anyway, and I certainly have no regrets!

He also brought on board Ken Bonnie, a past reviewer for Rue Morgue.  I didn't know Ken before this, and I'm glad Jay introduced us. Much like Jay, Ken is just the right combo of smart and funny, and the three of us hit our stride right away!

Episodes 1 and 2 are widely available, including on iTunes.  Our cyber-home is here, but follow us wherever you get your podcasts from!  We'll endeavour to post every Sunday evening/Monday morning to start your week off right (that's totally a thing)!

Hope you'll give us a listen!  See you on Planet X!

Posted by Marie Bilodeau at 10:07 No comments:

Back for its second year, Glowfair is a huge festival that takes over Bank Street in Ottawa over the course of two days. This year, I'm extremely happy to announce that I'll be telling some stories on both days!

Family Storytelling in the Enchanted Forest, Saturday, June 20
11:00 am- 11:45 am
2:00 pm - 2:45 pm
5:00 pm- 5:45 pm
MacLaren to Gilmour
I'm telling stories in an Enchanted Forest!  That's definitely a first, and I'm very excited.  These will be family appropriate, so I won't be killing anyone off.  We're definitely going to have fairy stories and maybe more space spiders, because space spiders.

Come on out and enjoy this wonderful festival! They have lots of great acts, activities and shows. Check out their full schedule!

Oh, did I mention that it was all free to attend?  Pretty sweet deal.

See you there!
Posted by Marie Bilodeau at 07:54 No comments:

For the second year in a row, ChiSeries Ottawa is nominated for the Aurora Awards*!  As one of the co-chairs, my name appears on the ballot, along with Matt Moore and Nicole Lavigne (two of my favourite people).

Some quirks have developed over time at ChiSeries Ottawa, possibly because its three chairs are rather quirky (which I believe is a prerequisite to becoming a ChiSeries chair).  Our fundraiser consists of a hat story (which is some of my favourite storytelling), and two fundraising goals. When Goal 1 is reached, Matt wears the hat for the night. When goal 2 is reached, he uses the hat picture as his Facebook profile picture for the month.  (Public humiliation is always great for raising funds. Thanks, Matt!)

Last night, to celebrate our second nomination, we had a great lineup of readers.  OKAY THEY WERE BOOKED BEFORE WE WERE NOMINATED. But damn they're good writers, so we'll pretend it was all planned. Check out Kate Story, James K. Moran and Melissa Yuan-Innes - you won't be disappointed!

Roomy and I also got excited and decided we'd make little cupcakes to celebrate the nomination. Then we decided cupcakes would be a lot of work.  Then we thought: everyone loves brownies! And people expect a hat story at ChiSeries.

We combined those concepts to make little Matt Heads.

At first, I thought it was hilarious.  I giggled as we made Matt Heads wearing little fez hats (I tried to find a fez btw. Really tough thing to do last minute).  Then I started feeling guilty as I made little dead Matt Heads with bleeding hat wounds.

But Matt likes zombies, so I figured that'd be okay. We made angry Matts, happy Matts, lovey Matts and Dead Matts.

Then, as a thank you to all our dedicated audience for the nomination, we fed them Matt Heads.

... In retrospect, that might have been a bit wrong.

Thank you all for your support! As Matt mentioned last night, it's Nicole's first time on the ballot. She's excited.  Make Nicole's Aurora dreams come true by voting for *her*.  Don't let her become old multiple Aurora-nominated foggies like Matt and I, having being in the presence of multiple Aurora Awards (mostly Hayden Trenholm's**) and yet having never won one.

Don't let the Nicoles of this world suffer.

* Vote for us! CAN-CON is also on the ballot. They are also awesome. Vote for them if not for us! :P Go, Ottawa!

** I'm pretty sure Hayden invites us over some days just so he can sit in front of his shiny Aurora Awards, slowly sipping red wine as he gauges our expressions of disappointment. I don't mind because he gives us red wine, too. If I had a bunch of shiny Aurora Awards, I imagine I'd do the same thing. Except I'd add a disco ball for lighting effect.
Posted by Marie Bilodeau at 08:29 No comments: