Amazon.ca has run out of copies of Destiny's Blood, and shipping is now scheduled for after Christmas (gasp!).  Well, that simply won't do.  To compensate for this unfortunate turn of events, and to encourage you to give this wonderful read to your loved ones, I'm offering a super duper fantastic discount thingy.

Buy Destiny's Blood from me for a straight $20, and I'll ship it to you for free!  The book will be signed and include a bookmark (awesome, I know!)  Contact me at web@mariebilodeau.com to settle the deal.  I accept PayPal, cheques, money orders and cash payments in dark alleys.  Order soon - shipping for Christmas is guaranteed only until December 14!

Amazon.com and Barnes & Noble are still stocked for the holidays on the American side, but if you'd like your very own signed bookmark to include with the book, fire me off an e-mail and I'll merrily mail one your way.


Layela Delamores wants nothing more than to settle into a quiet, peaceful life, running a small flower shop with her twin sister, Yoma. But Layela is tormented each night by terrifying visions that she cannot remember when she wakes. When Yoma vanishes, Layela is certain that her nightly visions hold the key - but only her sister's thieving friend, one of the last survivors of the ether races, can unlock them. Layela suspects that her friend isn't telling her the whole truth, instead sheltering her from her own visions.

Or herself.
Posted by Marie Bilodeau at 12:51 No comments:

Last weekend was the Ottawa Storytelling Festival, following a one-year hiatus so that it could be revamped and refocused.  Pat Holloway, Festival Co-chair, Caitlyn Paxson, Managing Artistic Director, and all of the festival committee should be proud of what they accomplished.

Thursday night featured Ivan Coyote, a storyteller and writer from the Yukon.  She was amazing, and what was even more amazing was the audience.  New faces abound, and the old Mayfair Theatre was almost full.  And the numbers kept coming out.

The Friday night line-up included a cabaret show, which was a brilliant stroke.  What better way to infuse the Festival with energy?  And again, the audience was diverse and fun.  I told a ghost story, with some singing and dying, and I loved the set-up.  (Little “squee” moment here: lots of listeners told me they loved my story, including tellers that I now worship. It's a great honour to have respected, world-renowned tellers tell you they like your style.  And so I “squee!!”)

Saturday saw Ben Haggarty's and Sianed Jones' re-imagining of Frankenstein, and the Ottawa Steampunk folk came out in full costume, earning the honour of being called the best dressed audience the British performers had ever seen!   They were followed by Tim Tingle, a Choctaw storyteller who can draw both laughter or tears with a single sentence.

Needless to say I loved this year's festival.  I wish I could have gone to everything, but the main problem with being in an artistic environment is the ever-present and wild creative energy, and so I ran away to write.  The muse wasn't knocking.  She was beating down the door.  I'm sure my publisher won't complain.

I can't wait to see what's in store for the next iteration of the Ottawa Storytelling Festival.  Make sure to keep an eye out for details, and to check it out.  In fact, check out any storytelling event in the region. The Ottawa Storytellers are making leaps and bounds into a more creative and current telling, offering a diverse array of stories and styles, while still maintaining its traditional stories and venues, as well.  This is an important diversification which allows storytelling itself to evolve into an art form that's accessible, striking and, more importantly, that draws in a wider audience.

Stories don't exist without listeners, and I couldn't be more proud of the Ottawa Storytellers for expanding the reach of its stories, and for ensuring that both the new and traditional tellings have a place on the many stages of our beautiful city.
Posted by Marie Bilodeau at 08:02 No comments:

(After reading this edge-of-your-seat tale, check out the update here.)

I was totally going to illustrate the tick story.  It was going to be great.  See, I even started: 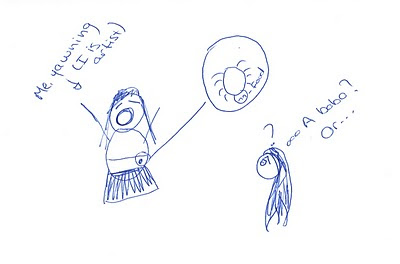 But then I remembered that I couldn't draw.  I figured it out out when I couldn't draw legs for me or a body for Roomy, since she was sitting down at the time and that proved too complex.  And I look pregnant, and my skirt is see-through, and there's just something generally wrong with all of this. 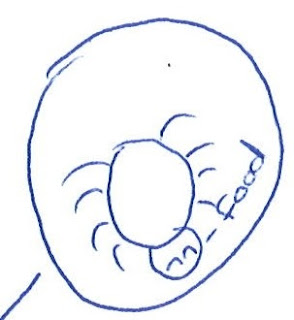 So anyway, I got home from a weekend away at a cottage and stretched (that's pretty accurate in the picture), and Roomy, whose got loads of hair (as depicted), asked if I had a bobo on my belly.  I looked down, and I saw some blood, and legs.  Yes, little moving legs.

Whispering "eeewww" ever so gently, I shuffled towards Roomy, who looked closer and then backed away.

And right she was!  Roomy managed to pull out the tick with tweezers, a needle and her health card.  Well, most of the tick, anyway.  Which was pretty awesome of her as she's terrified of spiders and ticks are in the arachnid family (or so one of my friends informs me.  Note accuracy of drawing - I put in eight legs.  Eight cute legs.)

The next morning we trekked to the clinic to get the rest of the tick out, but it was too full so we went for breakfast instead.  Priorities!

On Tuesday morning, I was ousted from work to go get it checked out.  I went to a nearby clinic, waited for a bit, and the doctor called me in.  She was an adorable older woman with red hair complete with white roots, and she sat me down in front of her.

Now see, at first I thought that was a trick question, kind of like when the dentist asked if I wanted Novocain, and I thought "hey, if he's asking, then LOTS of people must get three cavities filled with absolutely no anesthetics, so I can do it, too!", and I said no, and I saw stars, felt my spine shrivel and witnessed the tunnel of darkness closing in on my vision, and I've just generally been haunted by my own stupidity ever since.  Now to show I CAN learn, I totally said "um, yes?"

So she took out this nasty needle and froze me, and with first surgical scissors and then a scalpel, she cut my tender tender belly flesh and pulled out the tick bit.  Which she showed to me.  It was little.  A paw, methinks.

The best part was the doctor having to call Telehealth Ontario.  As she's only had to deal with one tick in her (long) career as a doctor, and she hadn't heard of ticks near Westport, she wanted to make sure there were no health advisories for rampaging Lyme disease or people turning into zombies and stuff like that.

Telehealth Ontario, it turns out, wasn't aware of ticks in that area, either.  So they've no clue what wonderful bacteria this bibitte has gifted me with, but they're very curious to find out.  Depending on "what happens to me," as was kindly put, they might put out a health advisory.

Maman, I'm moving up in the world!

In the meantime I'm putting this super duper antibiotic cream on my belly hole.  The cream is called Bactroban, and must be said in very dramatic inflections.  It even has a theme song, now!

All's good on the bug front, though.  My biggest concern is my unfortunate reaction to band aids.  The red welts are not the cutest thing I've ever seen.

After all this sexy talk, don't forget the cabaret show tonight!  I'll be performing in the Vernacular Spectacular, a part of the Ottawa Storytelling Festival, starting at 10pm at St. Brigid's Centre on St. Patrick's.  Don't worry, I won't be telling the tick story.  But there will be some singing! 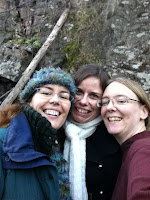 I recently spent a few days at a cottage in the middle of the woods with storyteller Ruthanne Edward and poet Kathryn Hunt, prepping for our upcoming National Arts Centre show The Warrior Queen: Chasing Boudicca.
For a few days we were isolated, just the three of us, and we read books and poems, created a story arc, divvied up work and ran around in the woods with our canine companion, Willow.  We stared at the stars and imagined generations long vanished doing the same, we sang songs and danced, and we sat around fires as we pondered burning towns and lost battles.
Then on Monday I had the honour of being invited to tell at John Abbott College near Montreal.  One of the students asked an interesting question: what's your favourite part of storytelling, aside from the actual telling?
After spending a memorable few days chasing stories, it was easy enough to provide that as an answer.  It's always fun getting to know the structure of the tale you'll be telling and trying to remain true to its nature while adapting it to your particular style (or, in some cases, ignoring its nature completely.  Depends on the purpose of the show, really.)  It can take up to a hundred stories before finding one that resonates with the teller and demands to be told.
For my recent Shenkman Centre Show, Beyond the Fields we Know, I had to find some science-fiction and fantasy stories.  Easy enough, right?  I mean, I write the stuff!  Alas.  I had lots of sci-fi stories in my repertoire, but they weren't quite hitting the mark for me.  I had to enlist Roomy's help to find another story, since she's an avid short story reader, and it took quite a few before I read one I knew I could tell.
There's this amazing flow of energy and words when you read one of those stories that you know you can tell well.  It hardly means that learning the story will be easy, but it will certainly be worthwhile and memorable, for both the teller and the listener.  Well, that's the hope, anyways.
So chasing story is an amazing part of storytelling.  It takes time and dedication to find the right story, but the magic created when telling them makes the efforts worthwhile.  After a few days of immersing ourselves in Boudicca's story, I can say without a doubt that the January 20th show will be completely kick-ass!
And then I came home to deal with a tick.  Oh, yes.  But that's a post for another day.
Posted by Marie Bilodeau at 08:33 No comments: